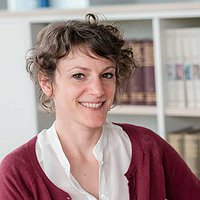 Jessie Pons studied history of art, archaeology, Indian studies, and museum studies at the School of Oriental and African Studies (University of London), École du Louvre, and the University of Paris. In 2011, she earned her Ph.D. in art history from the university of Paris-Sorbonne with a thesis on the early Buddhist art from Gandhara. Between 2010 and 2016 she worked as a postdoctoral researcher at the Centre for Religious Studies in Ruhr Universität Bochum and was a KHK Research Fellow (2013-2014). Since January 2016, Jessie Pons has been a Professor for South Asian History of Religions.

Trained as an art historian, she is particularly attentive to the relationship between religion and art and to the role of material objects in religious experiences and the study thereof. The historical region of Gandhara (present-day Pakistan/Afghanistan), located at the crossroads of Asia, is her favourite field for reflection. In her research on Gandhara, she draws upon the results of her doctoral dissertation on the identification and characterisation of sculptural styles to reassess certain problems connected to Buddhism in the region such as networks of communication between Buddhist sites and actors, the emergence of Mahayana Buddhism, instances of instances of cultural and religious interactions and the diffusion of the hagiography of the Buddha.

Jessie Pons has a keen interest in discourses around the preservation of religious material heritage and the appropriation, destruction or reconstruction of religious sites and art objects for shifting ideological purposes. Since 2016, she has been involved in several projects for the digital documentation and preservation of Buddhist artefacts (DiGA, Pelagios Working Group, coordinated with Frederik Elwert) and sought to develop new methods for the study of the history of ancient Buddhism and of South Asian religions in general through artistic expressions.

Introductory Classes (in German or English on demand)

Project Leader of DiGA , Digitization of Gandharan Artefacts , Linked Data Methodologies in Gandhāran Buddhist Art and Texts and Subproject B04

Individual Researcher of The Circulation of Divinities

Research Associate of Dynamics of Text Corpora and Image Programs